Worldwide Intelligence Network recently celebrated its thirtieth anniversary. The Publishers of Vogue, the New Yorker, and Vanity Fair magazines rated us among the Five Best Private Investigation Companies in America. “Expertise” rates us among the Best Private Investigators in Los Angeles. We work with some of America’s most highly regarded law firms, investigating their complex litigated matters nationally and internationally. We successfully brought favorable conclusions to such cases as counterfeiting, fraud, embezzlement, copyright infringement. employee malfeasance, and employee sexual harassment to name but a few of our assignments.  We also acquired sufficient evidence for a Federal Judge to dismiss all charges against our client due to our investigation. That case was prosecuted by a United States Attorney and investigated by the FBI. We proved their star witness (a Federal Agent) had perjured himself and falsified evidence. Our Surveillance investigators have acquired invaluable evidence of corrupt business dealings, questionable insurance claims, high-profile infidelity cases, and much more, evidenced by our 100% authentic testimonials.

The key to a successful Los Angeles private investigation of a civil or criminal case is when our investigators work under the direction of a seasoned lawyer with a clear and thorough understanding of their investigative objectives.

I recall on three separate investigations you made major contributions for our clients. Your work on an international litigation matter and the location of a significant witness immediately assisted us in obtaining a most positive result. Your finding of sequestered documents during a California matter resulted in extraordinary evidence for our client, and your location of substantial sums in hidden assets helped us to convince the defendants to agree to a favorable settlement – Martin R Pollner Loeb and Loeb

Notwithstanding your last minute retention, you immediately grasped the rather complicated legal principles in issue in this first impression criminal trademark case. You appeared in court well prepared, and were the best ‘second chair’ I have ever had the privilege to work with. Phillip M Prince, Attorney at Law

I write to reiterate my appreciation for the outstanding detective work and litigation support that contributed to the dismissal, at trial, of all charges against our client in the bribery case of U.S. v Mullen et al. (handled out of our Los Angeles office). Your investigative deductions regarding the bogus nature of key government records proved correct, and your identification of the authorship of the handwriting on the critical, so-called “anonymous complaint” was instrumental in establishing the dishonestly of the case agent up whose testimony the government had centered its prosecution – John Lang, Loeb & Loeb LLP 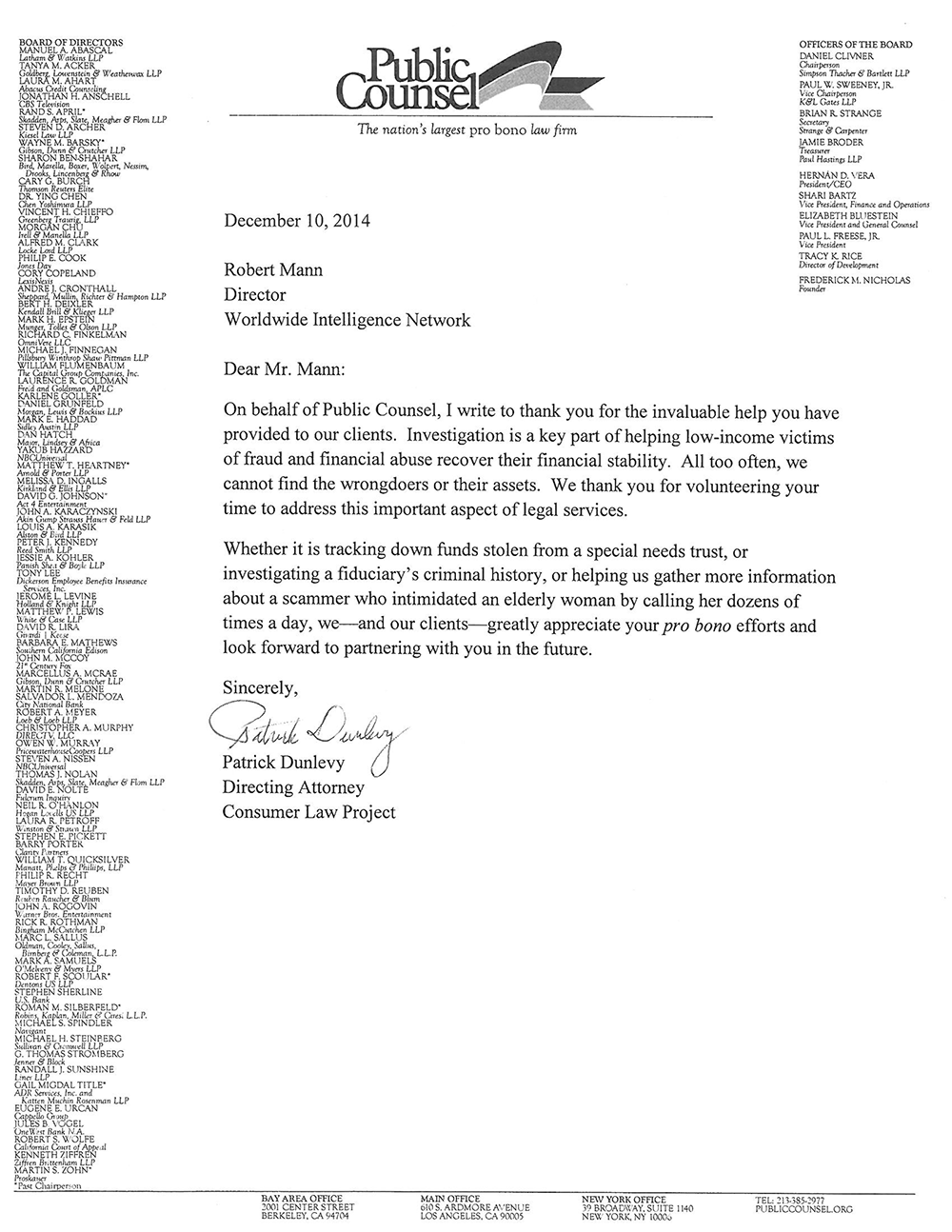 Many of our private investigators are former federal agents and law enforcement officers. Since 1991, Worldwide Intelligence Network has maintained an astonishing record of success as a Los Angeles civil and criminal private investigation company delivering clients swift resolution for their cases.

Worldwide Intelligence Network’s Los Angeles litigation support services division is proud to provide pro-bono investigative services to the Los Angeles Public Counsel. Our Director Robert Mann is a qualified provider of the California State Bar MCLE Program and has presented numerous MCLE seminars to some of the most distinguished law firms in Los Angeles, Ventura, and Orange Counties.