Lead detective and President of Worldwide Intelligence Network (wincor.com) Robert Mann has over 29 years of experience working on extraordinary national and international complex investigations alongside some of the most renowned attorneys in America. As an accomplished California and New York Licensed, Private Investigator Mann has dedicated his career to solving epic civil and criminal investigations. Mann investigated matters concerning embezzlement, law enforcement misconduct, counterfeiting, intellectual property infringement, criminal conspiracy, identity theft, asset location, and recovery. Worldwide Intelligence Network is also licensed as a Personal  Protection Bodyguard Services company Mr. Mann is known for his expertise in interviewing, researching, assessing, writing/editing and preparing concise investigative reports on behalf of his clients. Mr. Mann attributes his lay understanding of the law is due to working under the direction of various brilliant attorneys. Mr. Mann is knowledgeable in evidentiary procedures and the validation of admissible evidence, as well as applicable fraud statues at the State and Federal levels. Many of his investigations in the USA and abroad have and continue to be extremely challenging and, at times, rather dangerous. Mr. Mann possesses superb communication skills, he is a published author, and he is proficient in Spanish. Worldwide Intelligence Network was named among the Five Best Private Investigation Companies in America by the publishers of Vanity Fair, The New Yorker, and Vogue Magazines. The Better Business Bureau ranks Worldwide Intelligence Network A+. Please see all of his authentic testimonials. 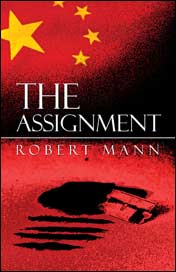 Inspired by an actual investigation conducted by Mr. Mann in Asia, this fictional novel is based upon that experience, The Assignment, is a riveting suspense novel based on Mann’s real-life encounter with the world’s largest criminal cartel in South East Asia and China.

(Synopsis) Desi and Rob Riley were clandestine government agents stationed in Beijing when Desi was arrested, charged, and tortured for committing espionage against the People’s Republic of China. The CIA believed Rob might trade Sino-American intelligence to China to gain Desi’s freedom. As a result, Rob became the target of a global manhunt to terminate him before he reached China. His journey to save his wife is a fascinating tale of ingenuity and bravado. After freeing themselves from the scrutiny of China and the CIA, Rob and Desi retired from the CIA. They entered the private sector where life was great until one evening when they received a telephone call that changed their lives and took them full circle back to relive the horrors of their past. The reviews on The Assignment are impressive. The Assignment can be purchased on amazon.com. http://www.amazon.com/The-Assignment-Robert-Mann/dp/1413742629