For the past twenty-nine years, Worldwide Intelligence Network has worked alongside some of New York’s most extraordinary attorneys as New York Civil and Criminal Private Investigators for their complex litigated matters. An example of our investigative prowess was when an Assistant US Attorney believed he had “a slam dunk” Federal Bribery conviction in the bag against a client of the firm who retained us. Preceding the indictment the FBI, DEA, IRS, US Customs and Immigration had all participated in a nationwide investigation of the client at a cost of two million dollars. Our investigative findings led to the dismissal of the case due to “outrages government conduct”

Another matter our New York Civil and Criminal Private Investigators resolved on behalf of another attorney client involved the embezzlement of one of Europe’s largest banks. The bank had been victimized by an independent film company in Hollywood who embezzled two hundred and twenty nine million dollars. Provided with a court order obtained by our attorney client, we were assigned to secure the offices of the film company to preserve all the film company’s documents. While patrolling the offices of the film company, we came across a closet containing janitor supplies, and a four-drawer file cabinet that had at all times been locked except it wasn’t one evening. That sequestered file cabinet contained documents that established irrefutable evidence of  the embezzlement. We were then assigned to try and locate where the embezzlers hid the money. Our investigation led us to Central and South America, where the perpetrators made a sizable investment in a rather large movie theater complex. We then found the offshore bank where the balance of the embezzled funds was deposited. Our investigation led to a very favorable monetary settlement for the bank.

ACCOLADES FROM OUR CLIENTS

“It would take a book, rather than a letter, to do justice to your achievements and adequately describe your personal contributions as a fact analyzer, case energizer, attorney inspirer, and truth seeker.-“Martin R Pollner Loeb & Loeb LLP.”

“I want to reiterate my appreciation for the outstanding detective work and litigation support that contributed to the dismissal at the trial of all charges against our client in the U.S. v Mullen et, al case. Your investigative deductions regarding the bogus nature of the Key Government records proved correct. John Lang, Loeb & Loeb LLP.”

“Notwithstanding your last minute retention, you immediately grasped the rather complicated legal principles in issue in this first impression criminal trademark case. You appeared in court well prepared, and were the best ‘second chair’ I have ever had the privilege to work with.– Phillip M Prince, Attorney at Law”

“We were impressed not only with their handling of those witnesses but also their understanding of how the information that they obtained fit in the context of the litigation. We use them on other matters and expect to continue to do so.-Carl Prindonoff General Counsel Albert B Glickman and Associates”

“You were able to do all of this in a very timely manner, and we are confident we will use your services in the future. – Julie Berkus, Oldman, Cooley, Sallus, Birnberg & Coleman, LLP.”

“It was a real pleasure to have you present at the Beverly Hills Bar Association on the ethics of retaining a private investigator. The program was well received and gathered high praise. The law offices of William S Wenzel APC.” 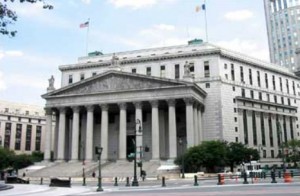 A highly regarded international New York law firm retained us to assist them with a complex breach of contract suit where the plaintiff was seeking forty five million dollars in damages. Our clients represented the defendants and asked us to locate a former employee of the plaintiff they wanted to depose who might very well have a trove of valuable information. After days searching for her through multiple proprietary channels, we were unable to locate her. One of the partners in the firm recalled reading an newspaper article concerning her that he found in the discovery files. The article stated that employee was the personal assistant to the CEO of the plaintiff company who  had accused her of stock fraud. We located that article and learned the former employee was a female and she had plead guilty as charged. It became apparent that she was no longer incarcerated, so we made a “Hail Mary “attempt and called the judge’s chamber, who sentenced her. The clerk in the court was incredibly helpful and gave us the name and telephone number of the convicted female’s parole officer. At this time depositions were underway when we received a call from our client telling us in no uncertain terms that it was imperative we find this woman as it was crucial to our client’s case. We called the parole officer, introduced ourselves, and asked if we could have the woman’s contact information. “No”, replied the parole officer, but she volunteered to call her and give her our message. A few minutes passed when our phone rang, and to our amazement, it was the witness we so desperately searched for. She said the only reason she returned our call was because her father was a Private Investigator, and she knew how difficult it was for us to locate her. We heard that while the CEO of the plaintiff company was being deposed he learned the defense would be deposing his former assistant. It was then we were told that he turned white. About two minutes later the CEO grabbed his chest, looked faint as though he was having a heart attack. EMS was called and they rushed him to a local emergency room. The case settled!!  The witness’s story proved to be rather fascinating.